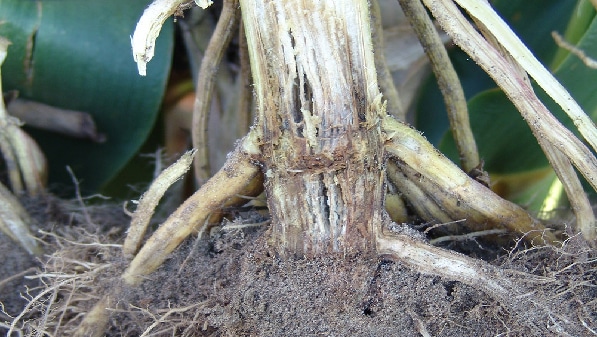 Standing water or waterlogged soil is where you typically see crown rot. Crown rot causes lodging and usually is associated with other stalk diseases such as fusarium and anthracnose. Cool soils and compaction also favor crown rot. Affected plants may be lighter in test weight, causing difficulty harvesting and yield loss. Commonly the crown of the plant, when split longitudinally, will show a brown/tan coloration near the crown when it should  be healthy white. Usually other stalk diseases accompany crown rot as it decreases the health of the plant and weakens the stalk. Roots of infected plants are often weak and will break off causing poor stability with limited nutrient uptake. This is commonly seen during dry years that are followed by extended wet periods. It may be found sporadically around the field due to varying soil conditions.

Early lesions are small spots that have a necrotic halo around the edges. It is very hard to differentiate between several of the other fungal leaf diseases at an early age as they may look very similar. As it progresses, GLS lesions become rectangular with straight  edges between the leaf veins. Lesions turn a grayish color and can merge together to take over large portions of the leaf. This disease is commonly found before silking and progresses from the lower leaves to the upper canopy. The pathogen builds up in residue over time, and is favored by hot temperatures and high humidity. Periods of extended leaf wetness enhance infection and spread. If the area of the leaf affected is large yield may also be impacted, especially before grain fill. Stalk rot may increase in heavily infested areas causing lodging and harvest loss. Look for varieties that show resistance to GLS, no hybrid is completely immune but it will slow development and impact of the disease. Susceptible hybrids may be sprayed with foliar fungicides if GLS is suspected in the area. Crop rotation will help but is not a total solution. The use of tillage will break down residues that harbor GLS, decreasing risk of infection the following year. 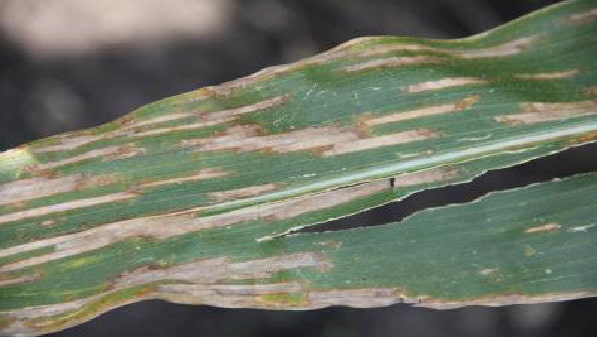 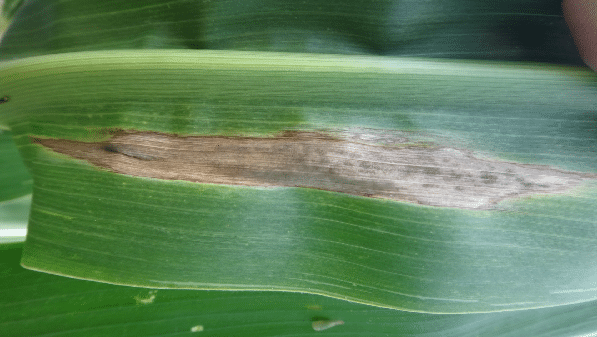 Early lesions are gray/green in appearance and elliptical becoming tan as they enlarge to a classic cigar shaped lesion. They are unrestricted by leaf veins, unlike GLS. In moist conditions, the lesions produce dark gray spores that give the plant a dirty appearance. As they progress the lesions can coalesce and cover almost the entire leaf margin causing heavy blighting. NCLB  survives on corn debris and can build up over time especially in high residue and no till. This disease loves humid areas and is favored by heavy dews and frequent rain showers. Rain causes spores to be splashed onto the crop and temperatures above 65 degrees allow the onset of the disease. Generally, it will begin to manifest on the lower leaves and work its way up the plant. Yield loss can occur due to decreased leaf area for photosynthesis and limited ear fill may occur. Other stalk rots may move in secondarily and cause difficult harvest due to lodging. However, if the onset is late or after ear fill, yield loss will be minimal. For control, select hybrids that are resistant or show tolerance. Make sure to rotate crops and break up residues with tillage to decrease chances of survival. Some fungicide applications may reduce yield loss if disease is severe.

The same fungus that causes stalk rot can cause foliar disease early in the season. Mid-season you may see top dieback where plant death from the top down occurs a few weeks after tasseling. Late season infection is when shiny black discoloration occurs on the outside of stalks by the nodes. Infected stalks will easily be crushed when squeezed, this may cause an increase in lodging. If a microscope or hand lens is used you can find small hair like structures on the outside of the stems for positive identification. This disease is favored by plant stress, following pollination and may cause a reduction in yield with harvest difficulty if plants begin to fall over and lodge. When attempting to manage anthracnose try to rotate for at least one year, and look for varieties that show resistance. 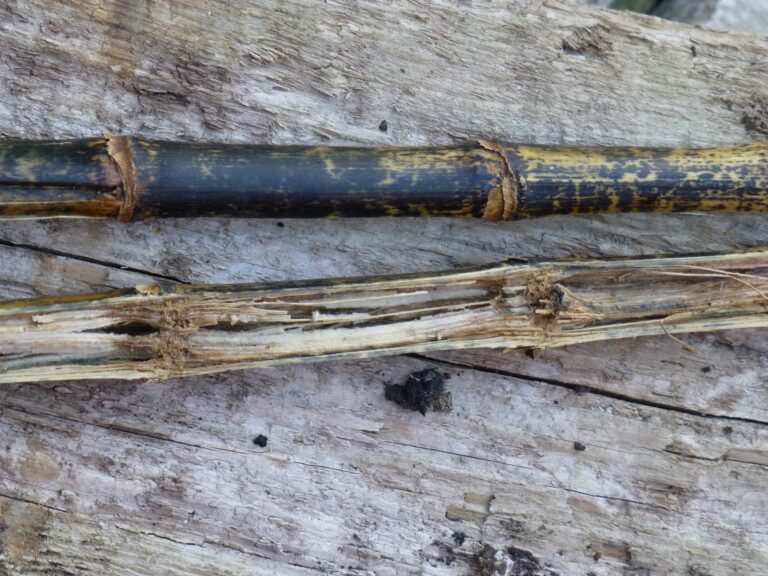 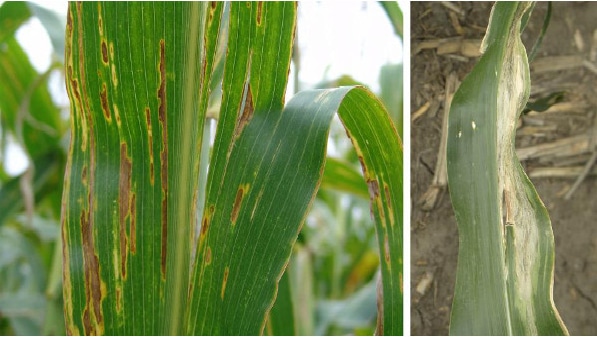 Stewarts wilt is vectored in the gut of flea beetles. It can cause early season wilt and late season blight. Early season wilt has yellow or bleached leaf streaks, internal vascular discoloration, and the crown may begin to decay and start rotting. Eventually this can lead to plant death. Late season infection occurs after tasseling and shows large elongated lesions on the leaves. Commonly these lesions are narrow with wavy margins and tend to have a yellowish border. Late infection rarely results in plant death but may contribute to more stalk rots. It looks similar to NCLB but lesions are long and wavy, and only cause yield loss if stands are weakened early or if the foliar infection takes over a large portion of the leaves, reducing photosynthesis. The best management technique is to focus on controlling flea beetle populations, insecticide treatment may help with this, and foliar insecticides may be used in cases when an economic threshold is reached.

Mycotoxins in corn can be an issue in both grain and silage markets. Some years we see an increased presence of mycotoxins whereas others we don’t see any issues. The reason we see mycotoxin issues in corn revolves around ear molds. Mycotoxins are produced by molds, but not all molds produce mycotoxins. The commonly seen mycotoxin DON or vomitoxin, is produced by gibberella ear mold. DON is one mycotoxin that causes corn to be rejected or docked at ethanol plants.

When an ear has suffered damage from birds, hail, or insects; this allows molds to begin inside the husk and ear. Just because an ear has mold on it, even mycotoxin producing mold, does not mean there will be mycotoxins present. If a mold is growing on an ear and is not disturbed or stressed, it will continue to grow and reproduce. Once the mold is stressed by environmental factors it will begin to produce mycotoxins in defense. The longer corn remains in the field and subject to stress, the greater the chance of mycotoxins.

When it comes to grain corn, drying will not remove mycotoxins, but will slow down their development. In silage, mycotoxins can be harmful if fed to animals, especially DON. Livestock are affected by the following molds and their corresponding mycotoxins produced: fusarium, gibberella, penicillium, and aspergillus. If potentially feeding infected silage research feeding guidelines for the appropriate toxic levels. 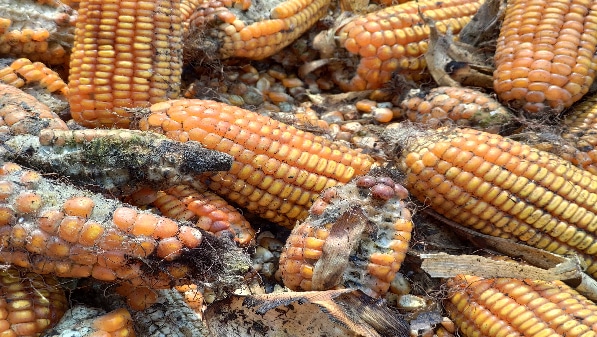 ← Back to Corn Main