Recently, soybean fields around the Northeast have finally seen some much-needed rain. Many fields entered a long period of little to no rainfall after the seed entered the ground. Once the plants emerged, the only real stressors we encountered were due to the droughty conditions. However, after the last few weeks of warm, wet weather, disease presence in soybean fields has become evident.

Soybean fields around the Central, NY region have been experiencing pressures, mainly from phytophthora root rot. Farmers noticed plants dying off in compacted areas of fields, initially worrying of sudden death syndrome, stem canker, or brown stem rot as we have seen the impact of those diseases in the past. After scouting some fields that showed symptoms, the disease pressure I encountered in most of these compacted areas is Phytophthora Root Rot. 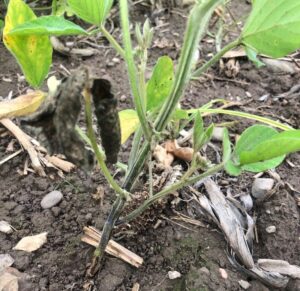 Phytophthora root rot is a tricky but significant disease. This disease is caused by a fungal-like pathogen that remains living in soil residues in the form of oospores for up to 10 years. It is favored by periods of warm, wet weather in combination with poorly drained or compacted soils or where ever the pathogen is present and the soils that have been saturated for 7-14 days due to heavy rain fall.There are many soybean varieties that have been bred to have the major gene (Rsp) that helps with resistance to phytophthora, but there are multiple strains of the disease to control against. Some varieties have multiple genes listed to control several of the strains, but we are still seeing other strains come into areas that are not fully controlled by the gene. However, the good thing is the only known host for this is soybeans so managing it can be done with rotation.

It’s important to correctly identify if you are seeing Phytophthora in your soybean fields or if there is another disease Phytophthora can affect a soybean plant from seed all the way up into the reproductive stages. Symptoms of this disease later in the season include stunted plants that then begin to look wilted. If you look where the stem meets the soil surface, there are brown lesions and the stem itself has a brown or dark chocolate brown appearance. Infected plants will have rotted root systems and yellowing or completely dead leaves starting from the bottom working their way up the canopy. The dead leaves usually stay attached to the plant and the infected plants are usually found in patches or parts of a row.

The fields that have shown evidence of this disease are the heavy clay soils as well as the compacted areas including the headlands. After the last few weeks of scattered rain show-ers and heat index’s over 90 degrees Fahrenheit, these heavy areas have really begun to show the impact of phytophthora root rot. Unfortunately, this disease is not one you can truly control once the symptoms occur, but it is one you can manage going forward into the next year. As mentioned, planting varieties with the Rsp gene(s) that provide resistance is extremely important, especially in heavier, poorly drained fields or fields with previous disease pressures. It is also important to pay attention to the field tolerance for each variety, try to look for a high tolerance along with the resistance gene if you know phytophthora has been an issue in the past. Another key component we can control is drainage, by minimizing compaction where we can and improving the poorly drained areas, that will reduce the likelihood of providing an environment for this disease to thrive and attack the soybean crop. Rotating your fields is a very important part in breaking the disease cycle as well as controlling the residues that are left on the surface as the fungus can live in them.