It seems that many fields across the country have been experiencing ear drop issues. Recognizing that it is not an issue with any one brand or variety, specifically is important. Collectively across brands, there have been issues with ears on the ground prior to or during harvest. This not only indicates yield loss and causes unneeded frustration, but it could lead to unwanted volunteer corn in the field next year.

There are several factors that can lead to ear drop, both varietal and environmental. The shank of the ear develops in a two-week time frame around pollination. It’s important to understand the development to narrow our focus in on what could have caused potential loss. Let’s take a deeper dive into what causes ear drop and why certain varieties are more susceptible than others.

Causes
The environment plays a huge role in ear development and shank strength.

During that two-week time frame of shank development, the weather plays a crucial role. If there is any moisture stress surrounding the pollination and silking period, the plant will most likely produce a “drought” shank which will be smaller in diameter and in turn weaker. Not only can drought during this time be impactful, but heat stress as well. If the plant experiences extremely high temperatures during this stage, it will most likely weaken the shank attachment leading to increased probability of ear drop. Both of those extremes coupled together can lead to heavy ear drop and yield loss. Unfortunately, depending on your location this year, 2020 dealt many farmers an unfavorable hand during silking/pollination which included both heat and drought stress.

One of the most common thoughts when you notice ears on the ground is insect damage or disease pressure. In some cases, this is the potential cause for ear drop, but not in every case. European corn borers have the ability to chew through and burrow into the shank, weakening the attachment and increasing the probability of ear drop. In some instances, we see pathogens come in and weaken the plant and the shank attachment, making the shank unable to stay attached and hold the ear the plant has developed. Some common pathogens we may see are Fusarium or Diplodia stalk rot. The best way to identify if either of these is the cause, is to look at the shank for borer holes or any indication of unhealthy and decaying shanks.

While there are several factors that may impact the strength and longevity of the shank, the ear must be taken into consideration too. During the critical shank development period, if the unfavorable weather creates a weakened shank, the onset of a large ear can lead to this unfavorable outcome. If during seed fill, the weather is cool with a long grain-fill period creates a large ear. This coupled with a weakened shank may increase the possibility of seeing ear drop before harvest. Even though we always hope for a large, well developed ear, if the shank can’t support it we may see it end up on the ground instead of in the harvester. 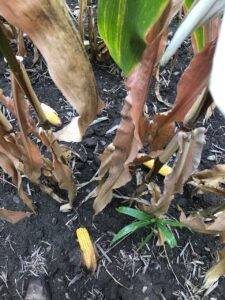 One difference between the fall of 2019 and the fall of 2020 in the northeast is the ability of the corn to dry
down. In 2019, corn struggled to dry down and reach maturity whereas in 2020 some people saw very fast dry-down due to the hot, dry conditions. This very quick dry-down may have also played a role in those fields that exhibit ear drop. When a plant dries down fast, the cells at the base of the shank dry fast and may become brittle. This causes a higher chance of vulnerability and potentially having the ear detaching from the plant.

Is it Hybrid Specific?

Ear drop problems can vary by field, hybrid, planting date, and many other factors. Sometimes we notice ear drop in the same field year after year or sometimes even in the same hybrid, but with the multitude of factors that affect ear drop, it can vary every year.

Some hybrids may be more vulnerable to the possibility of ear drop. During a drought, some hybrids may be able to produce more kernels and a larger ear than others, despite having a weaker shank. One of the biggest factors we have discussed is weather, which we know that we cannot control. Depending on when certain stresses hit the plant, it can range across different relative maturities and what developmental stage they are in at that time.

It’s important to keep in mind many of the factors are environmentally based and out of our control. There are some measures we can take to help protect our plants against ear drop. If you suspect certain fields may have a higher instance of yield drop, try to harvest those first and at a slower speed so you don’t shake the plant enough to drop the ear before it reaches the head of the harvester. Look at hybrids with trait protection against insects to eliminate the impact of insect damage to the shank. Work with your SEEDWAY Seed Advisor to help pick hybrid with those trait packages, along with choosing hybrids that may have stronger shank qualities for the next growing season.